Sailing and Travel Guide to the Island of Vis

The island of Vis is a genuine and unspoiled example of real Dalmatia. Despite its picturesque Mediterranean beauty, olive groves and wines, ancient ruins and secluded beaches, the place is not overcrowded with tourists, as one would expect.

What kept Vis island under the tourists’ radar over the years was the Yugoslavian army. Due to its distant position from the coast, the island served as a military base, off-limits for foreigners until 1989. Now that tourism is slowly taking over, Vis became a destination for those seeking a quiet getaway and delicious gastronomy. 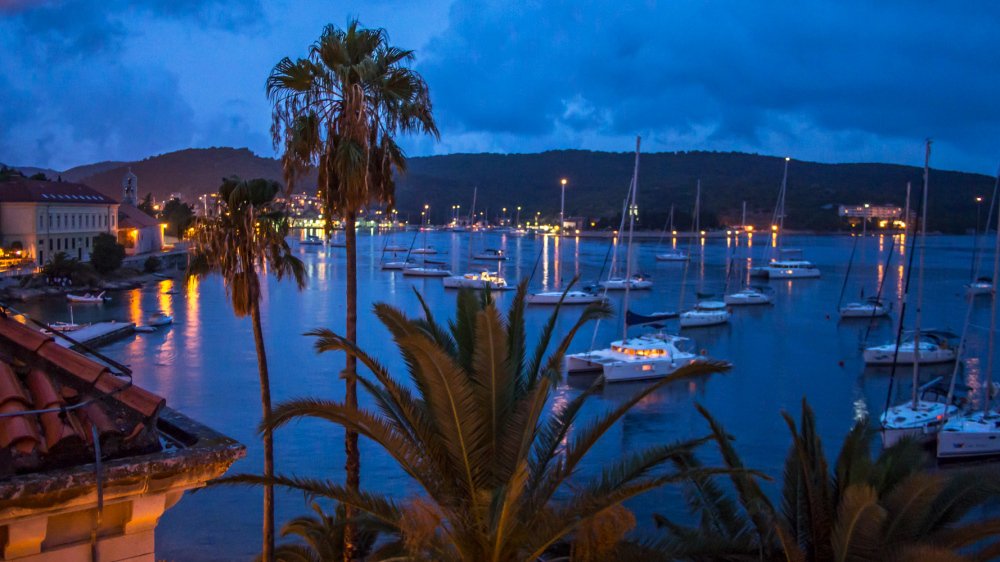 The best marinas, ports and anchorages on Vis island

Ports are usually crowded but they are located right at the heart of the settlements on the island. If this is what you like, then Vis island is the perfect destination for you. We recommend you find a berth or a bouy in the Vis or Komiza port. In high season you’ll need to get there quite early in the afternoon in order to secure your spot. But worry not, we have a blog that can help you with Online Berth Booking In Croatia.

City Port of Vis is a Marina located in the city port, and accommodates up to 100 boats. The unique atmosphere of the old coastal town with an abundance of restaurants and bars around the marina, market, and supermarkets provides complete comfort for nautical enthusiasts. The port of Komiza only takes up to 30 boats on the dock plus more on the buoys. You may also find a place at Kut Harbor Marina.

If you opt for anchoring in Stoncica, Budikovac Veli, Milna bay or Slatine bay, you need to take weather conditions into account. 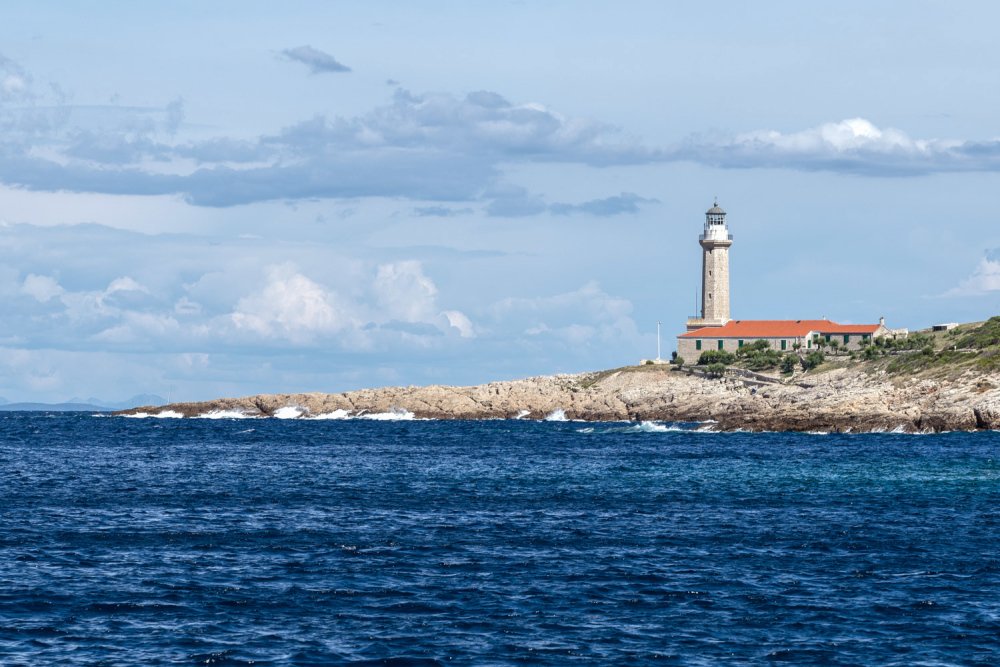 On the northeastern coast, Vis town is the oldest settlement on the island. You can find Greek vessels, Roman baths and Baroque Austrian architecture there. Interesting might be visiting the Tito’s cave headquarters, halfway up Mount Hum. Other than that, major historical sights are the Archeological Museum in the Austrian fortress and Fort George, named after the English commander of Vis, George Duncan Robertson. There are gaps for cannons on the interior terrace and all the walls are secured by loop-holes. This monument is best experienced on a bike as it’s mostly uphill. However, once you get there, the view is spectacular.

If you are visiting Vis town, It takes about 20 minutes to walk around the Harbour to Kut, the oldest and prettiest part. Built by the Venetians in the 17th century, Kut has a number of courtyards and passageways in limestone, balconies and steps rising up into the hills behind. In Kut, there is also the St Cyprian’s church, a baroque structure from the 18th century with a bell-tower.

Another tourist attraction on the western coast is Komiza, a charming fishing village. In 2017, the crew of Mamma Mia 2 refashioned the local port as the Greek resort of Kalokairi to shoot the dancing scenes.

Komiza´s main tourist attraction is the Venetian fortress and tower, Kastel. The Venetian authorities built it in order to save the city from possible Turks and pirate attacks. The fortress also houses the Fishing Museum. In the distance, you can see the islet of Bisevo. 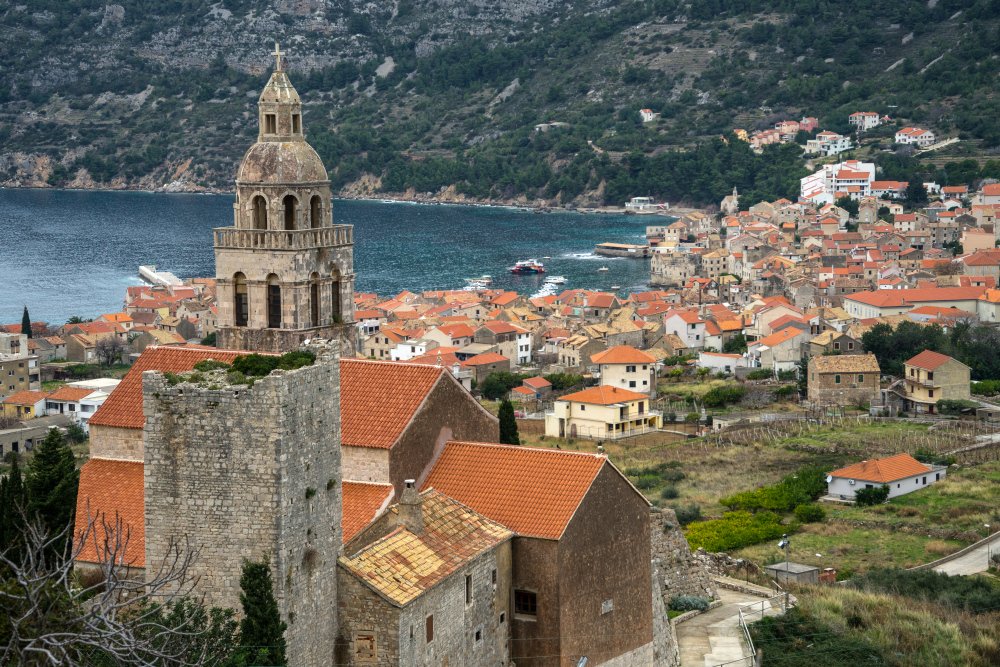 During your private cruise, you must visit places like stunning Stiniva beach and dazzling Blue Cave on Bisevo. Stiniva Bay is located in the southern part of the island and is approachable only through a narrow passage from the sea. There is no road leading to the beach, so it has managed to preserve its natural beauty.

Neighbouring Bisevo island has a series of caves with iridescent blue light, thanks to a shaft of sunlight meeting pure white sand on the seafloor.

Cycling is big on Vis, as well as exploring a network of tunnels built by the Yugoslav army, alongside abseiling and diving. Rent a bike and find a perfect cycling route for you on this website. Wrecks include a Boeing B-17, a bomber from the Second World War. 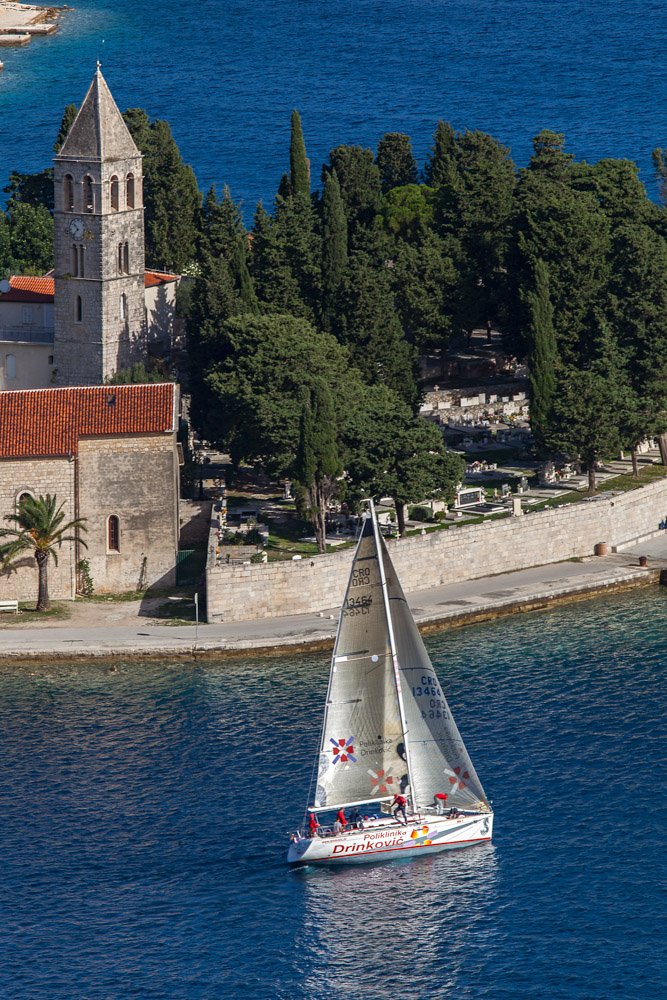 In Vis town, you will find some decent restaurants in the part of the town called Kut, on the eastern side of the port. Enjoy an aperitif at one of the cafés on the main street. Don’t miss out on local vermouth or the delicious sweet wine Prosek, which is matured by burying the bottles in sand. These two restaurants recommend our guests:

If you are up for a modest, yet delicious meal, Konoba Vatrica will do perfectly fine for you. It has a peka, a traditional wood-fired oven used to cook meat or fish.

Pojoda is widely regarded as the island’s best restaurant, and the prices are reasonable. The food is prepared to perfection. Enjoy Dalmatian staples plus standout dishes such as prawn and barley risotto or lentil and squid brodet. 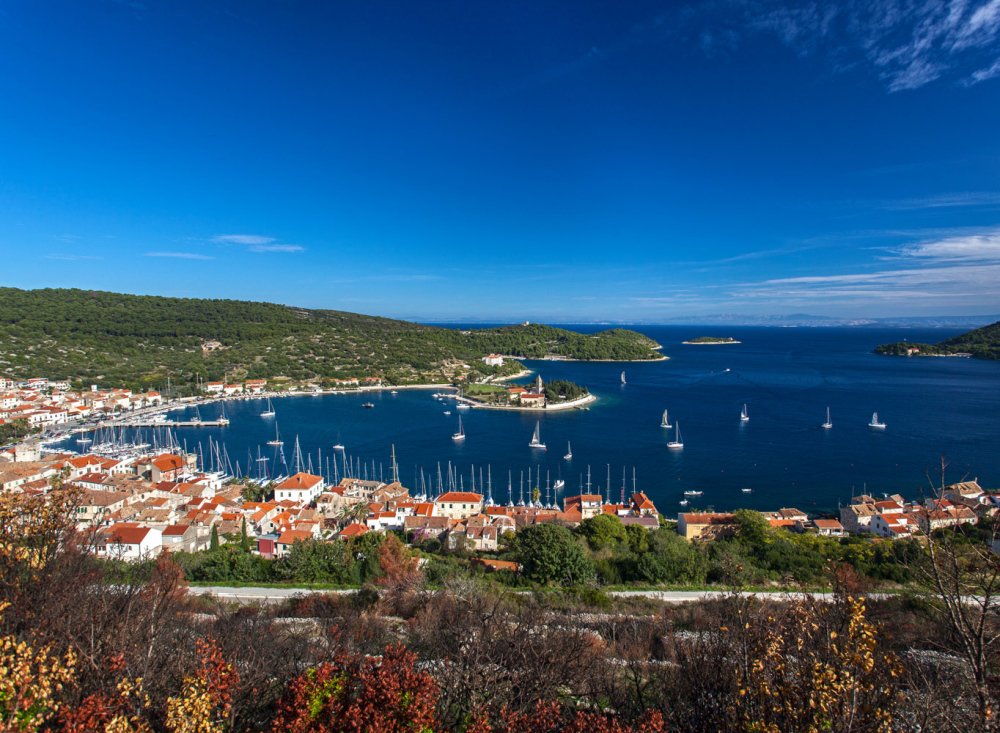 Winner of the “best beach in Europe” award, Stiniva, is located west of Mala Travna bay. Although not the easiest beach to get to, it is definitely worth the effort once you get there. It is a tiny pebble beach closed in by two rocky cliffs, with a small cafe on one side. 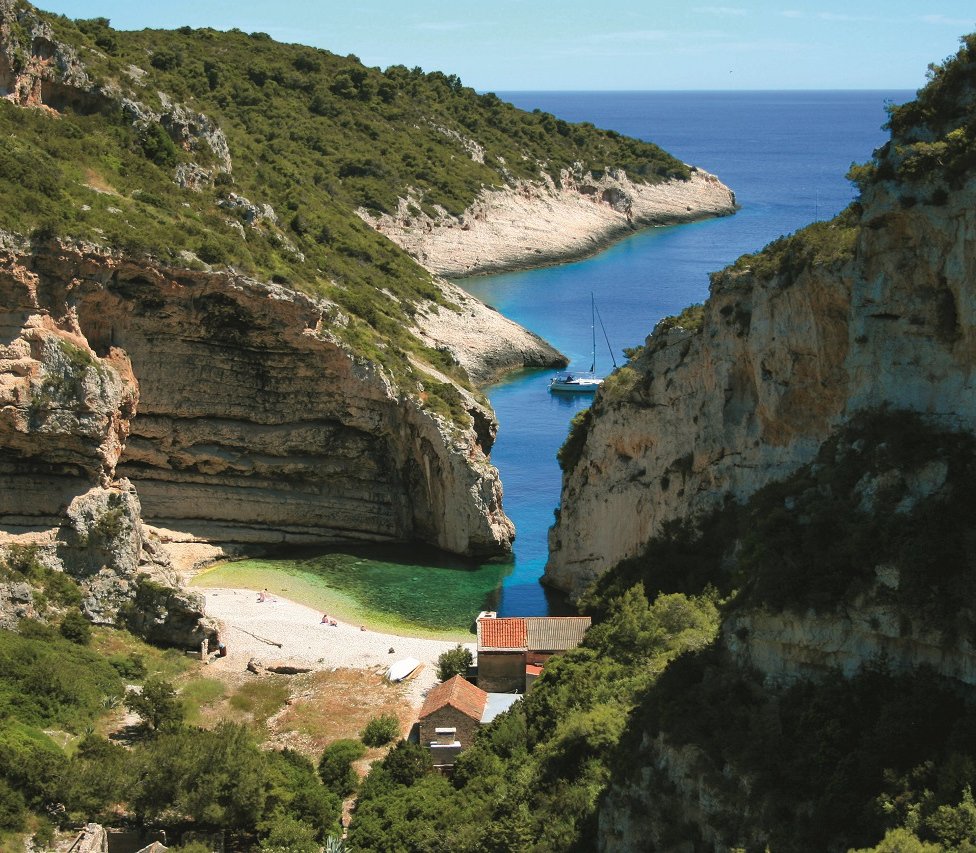 Another stunning beach is Srebrna. Its name derives from the large, flat, pale stones, meaning „silvery“ in Croatian. Located in the small tourist town of Rukavac on the southeastern side of the island, the bay at Srebrna beach is exposed to the open sea. It is a pebble beach, with some rocky areas and shaded pines behind you. Beware that you won’t find any water sports or restaurants and cafes.

Located near the lighthouse on the north of the island, Stoncica is a sandy beach with sandy bottoms and stunning reefs. The water at this beach is shallow for 30 meters from the shore, making Stoncica perfect for families and children. 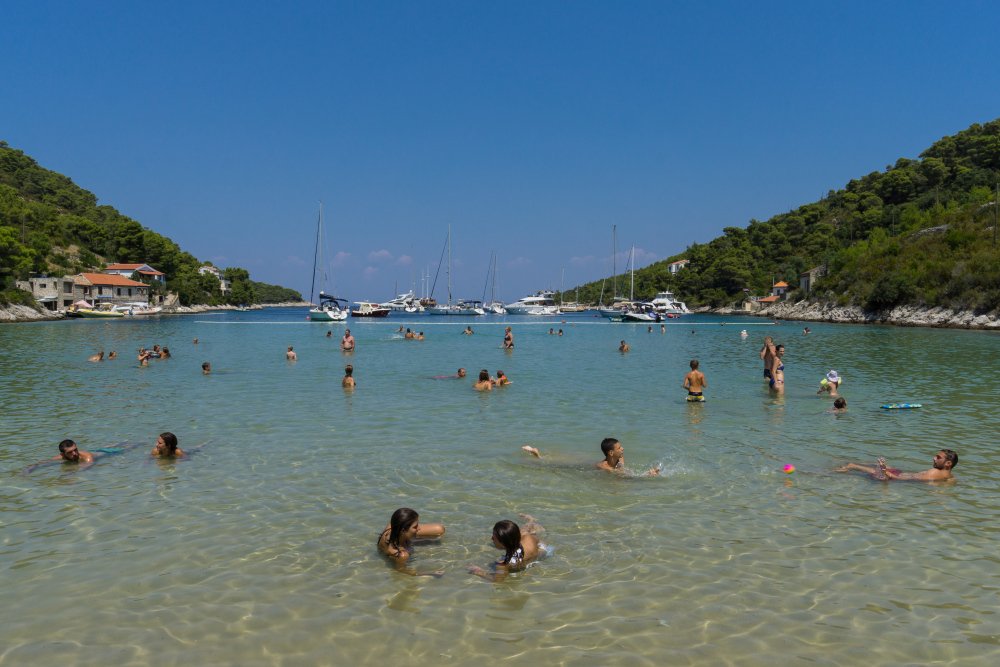 We’ve outlined everything you need to know to enjoy your time on this special island. We invite you to visit Vis, you will never forget it!