Pula, Croatia, is the biggest town on the Istrian Peninsula. With more than 50,000 inhabitants, famous historical sights, and awesome beaches, it is a fascinating must-see destination in Croatia. So, keep reading and discover the ten best things to see and do in Pula, Croatia.

Certainly, one of the best things to see in Pula are the historical sights. It was first an Illyrian “gradina” – fort and then was colonized by Romans. The city abounds in Roman architecture and monuments. Therefore, it is a pleasure to wander the streets of the old town.

Above all, the city of Pula is famous for its amphitheater, built by Romans back in the 1st century AD. Moreover, until the 5th century, the purpose of this monument was to hold gladiator fights and public legal proceedings. Even though it’s not as big as the Colosseum in, it’s still pretty impressive with a capacity of 23.000 spectators. Further, in the hidden tunnels and special rooms underneath the amphitheater there is a permanent exhibition of wine and olive growing in Istria in ancient times. Back in the days, they were used as a waiting space for fighters and animals before their combat.

Nowadays, you can attend various events, performances or concerts in the arena. Besides, this historical site is the 6th largest Roman Amphiteather and one of the best-preserved in the world. 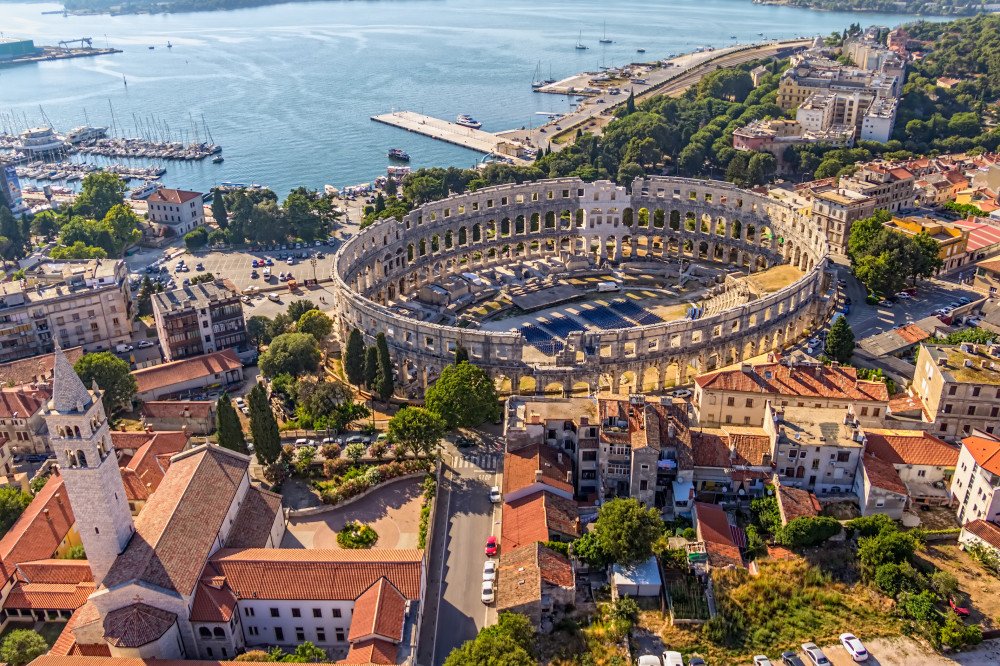 2. The Triumphal Arch of the Sergii

One of the several entrances to the old city center is the Triumphal Arch of Sergii from the 1st century BC. This monument was built in honour of Sergii family members and by private funds. 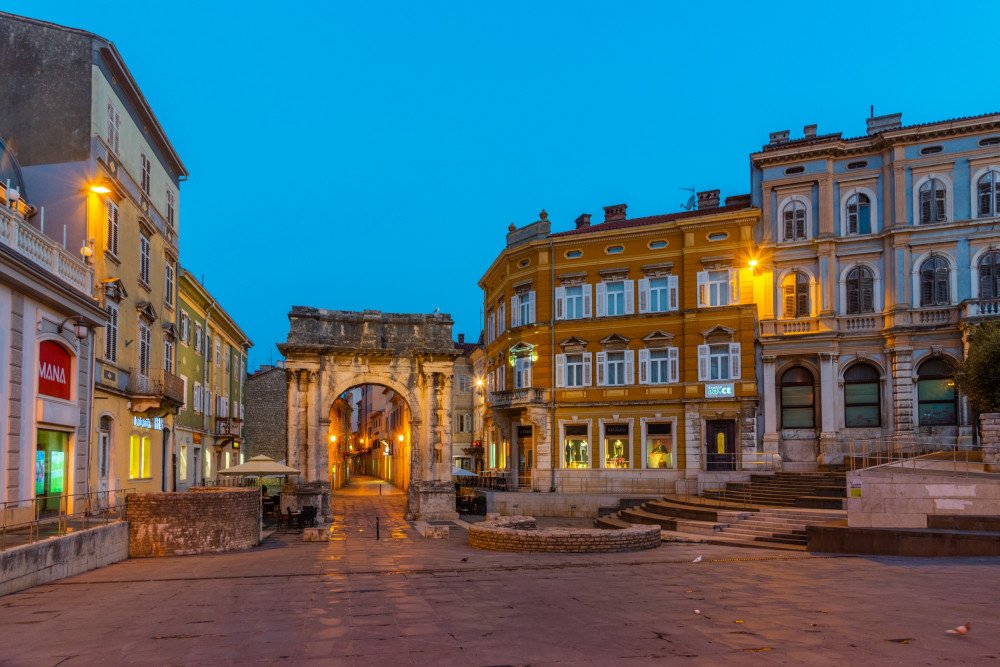 When walking the streets of Pula, Croatia, there’s no way to miss the Forum known as the main square. In the past, it was the main meeting point of Roman citizens and a place for all social gatherings. Moreover, another ancient monument – The Temple of Augustus is also located on the Forum.

Today, it is still the most important square in town, with crucial social, cultural, administrative and historical facilities. Architecture on the forum is a mixture of different styles from ancient and medieval to the modern present. 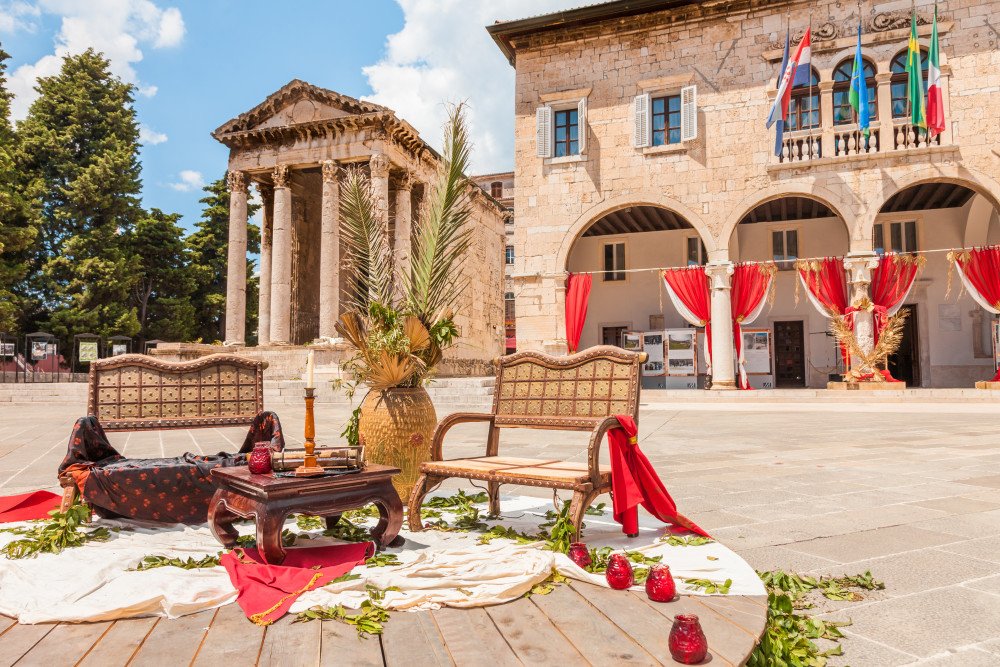 4. The Temple of Augustus

The history of The Temple of Augustus goes back to 2 BC. It was probably finished around 14 AD. The temple was dedicated to the first Roman emperor Augustus, who is also known as Octavian, and the goddess of Roma. Throughout the past, citizens used this monument even as a church and a granary.

The temple was almost ruined by bombing during the Second World War. However, it has been fully restored and is now open to public tours. Today, it is one of the best things to see in Pula, and it hosts an exhibition of Roman sculptures found in Istria. 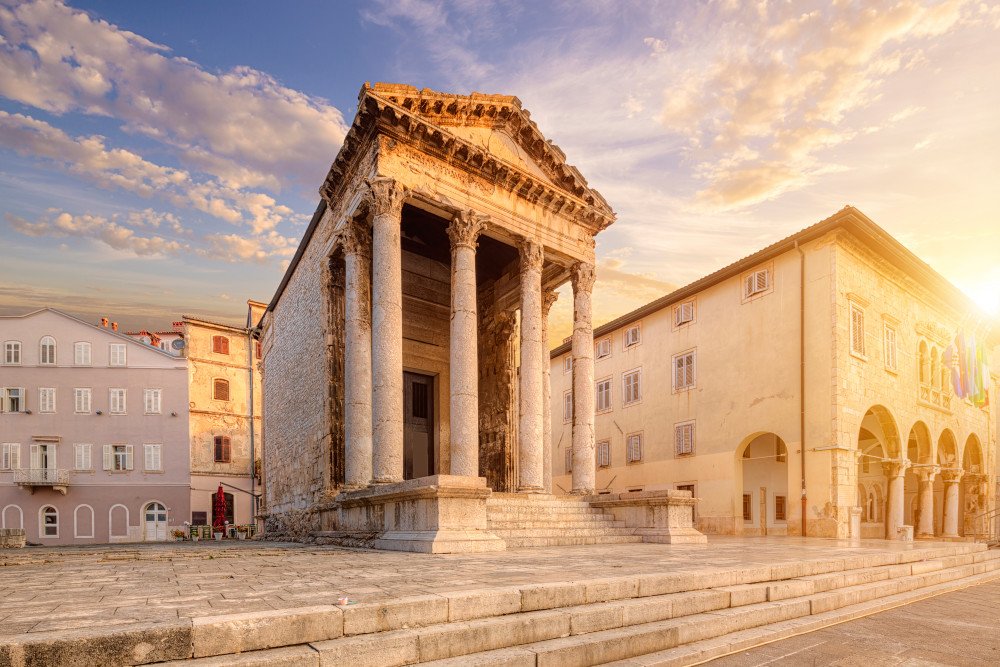 Like many Croatian cities, Pula also has a fortress. This one is called Kastel and it is located in the city centre on the hill. The purpose of the fortress was to defend the port or city against invaders. Venetians started building the Kastel in 1630, and it took 3 years to build it.

Nowadays, the Museum of Istria is located in the fortress, and it’s also a popular venue for concerts and social gatherings during the summer. Besides, one of the best things to do in Pula is to admire it from above. Undoubtedly, the best view of Pula is from this fortress. 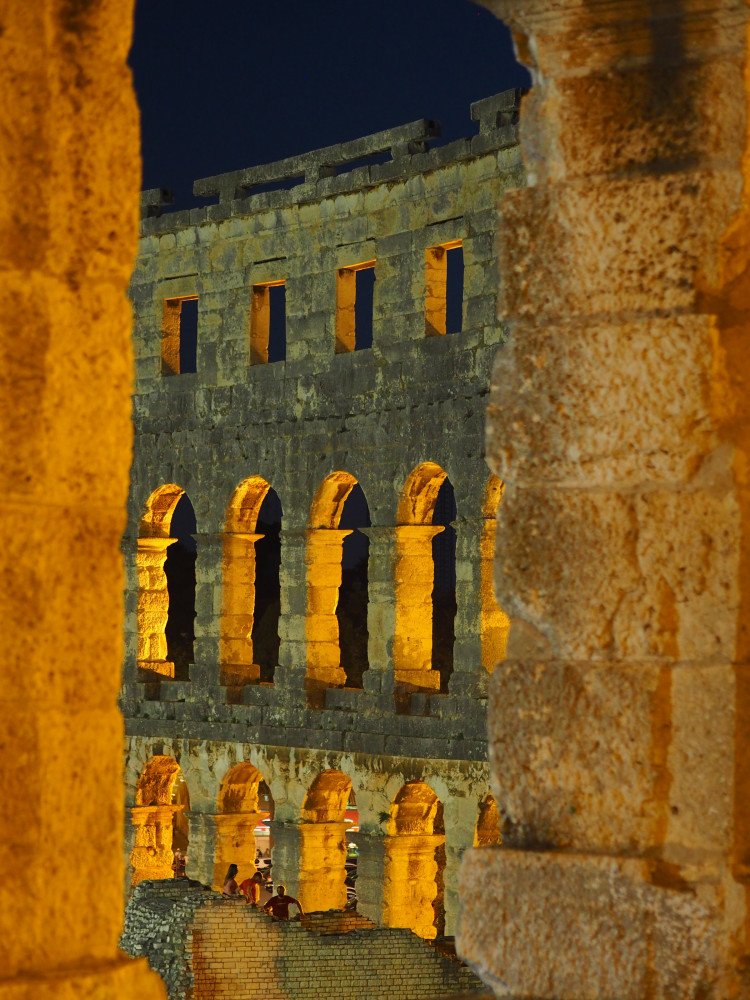 If you are a fan of marine life or have kids, one of the best things to see in Pula is the aquarium located outside the city. Its home is the Fort Verudela, a 130 years old fortress with an adjoining battery San Giovanni. Explore various exhibitions that are open all year presenting Adriatic, Mediterranean and tropical marine life or animal species living in freshwater. 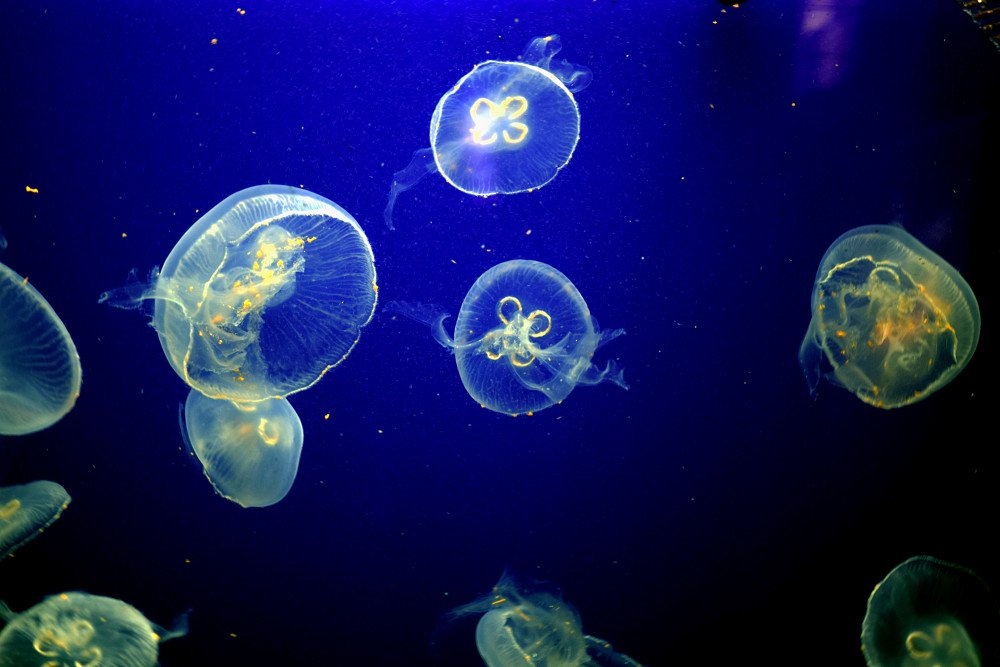 Most certainly, one of the best sites nearby Pula is the group of islands called Brijuni Archipelago. The 14 islands and islets form the archipelago and the National Park. The biggest one is Veliki Brijun and it offers attractive archaeological sights and stunning fauna and flora. A perfect place to explore and on board Nava boats from our new base in Pula! Check out all the boats available for charter from our base in Marina Polesana. 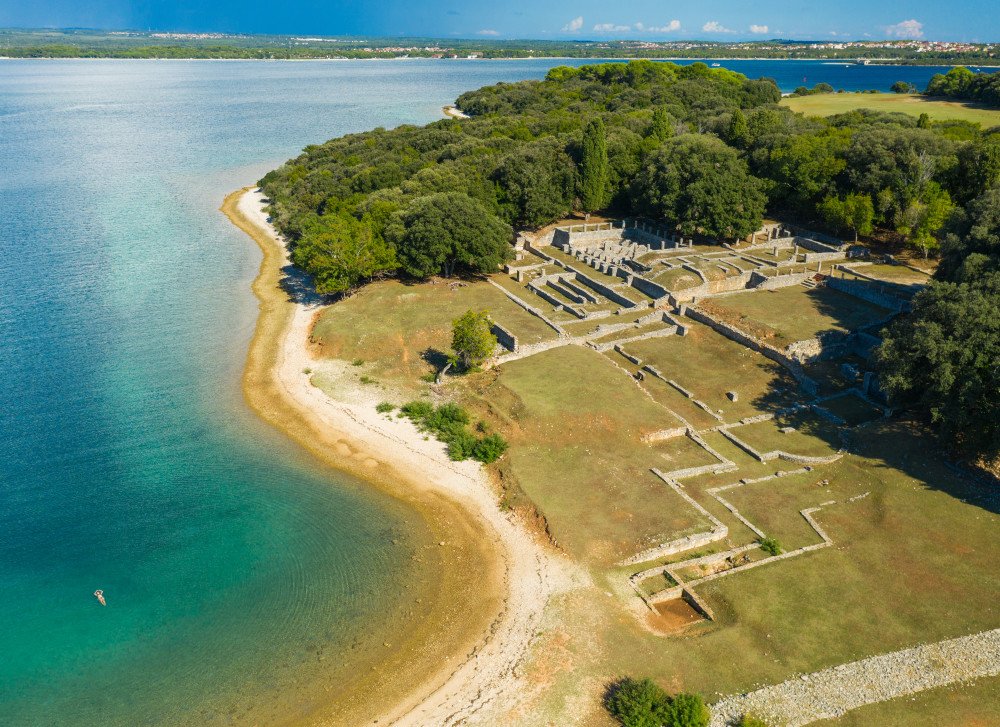 Pula offers much more than the nice walks along the ancient streets in the city center and great gastronomy. Take advantage of some of the finest beaches in Istria, and beyond! Here are just two great beaches with crystal clear water that we highly recommend.

One of the best beaches in Pula is the Beach Hawaii. You can find it on the Principina Cove at Verudela Peninsula. This rocky beach with pebbled middle is highly popular among the younger generation due to nearby cliffs. However, thanks to the gradual sea entrance it is perfect for families with children, too. Pretty high waves during jugo wind (strong southerly wind) were probably the reason it got its name. 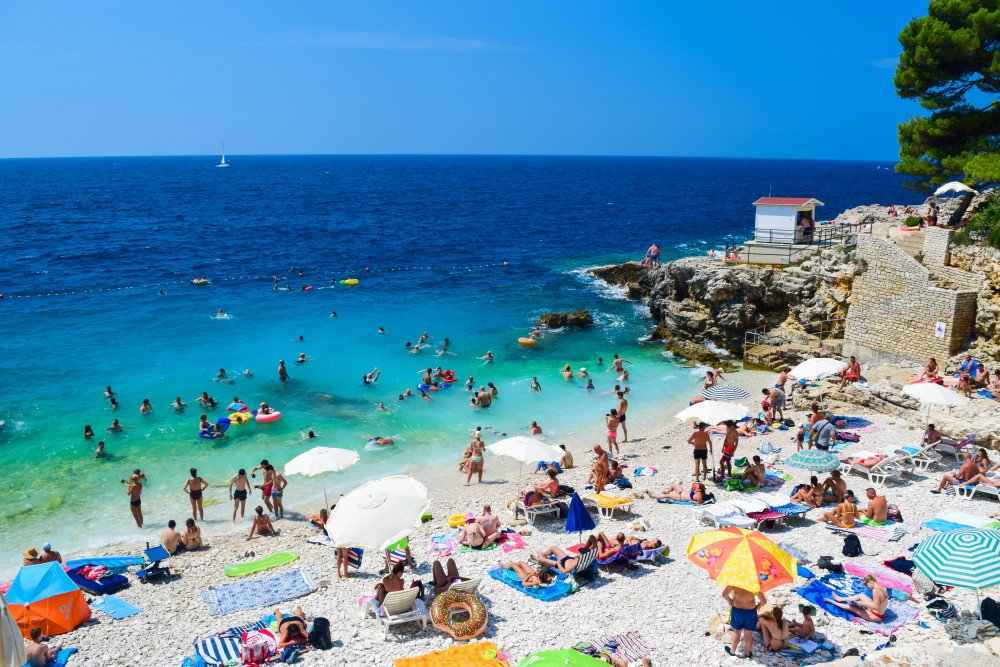 The beach Bi Val is part of the resort Bi Village located close to Fazana. Beach Bi Val is a very spacious pebble beach that is almost one kilometer long and 20 meters wide. Furthermore, this beach is fully equipped with all necessary facilities such as bars and restaurants, dressing cabins and outdoor showers, lifeguard service, beach equipment rental etc. It is also a great place for water activities such as windsurfing or aqua park.

10. The hidden gems – Charter a yacht

Further, the Brijuni archipelago and the beaches are not the only maritime areas worth exploring. The best way to do it is to rent a yacht charter in the nearby Marina Polesana. Not only will it help you to explore the best gems of Pula and Istria. Relax on some stunning non-touristy beaches and islands in Istria. This is the relaxation you deserve!

We at Nava Charter Croatia provide a charter of different yachts including catamarans, sailboats, and motorboats. If you are interested in getting on board and exploring the beautiful coastline of Pula Croatia and surrounding islands, feel free to contact our charter team. They will get back to you as soon as possible!

Take your family and friends on a perfect boating cruise. Charter a bare boat or a crewed boat, depending on your experience level and preference.
We use cookies on our website to give you the most relevant experience by remembering your preferences and repeat visits. By clicking “Accept”, you consent to the use of ALL the cookies.
Do not sell my personal information.
Cookie settingsACCEPT
Manage consent